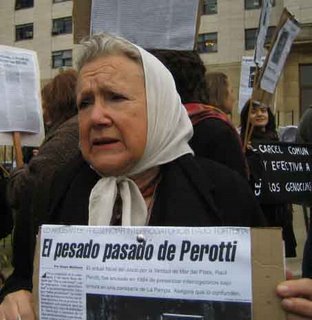 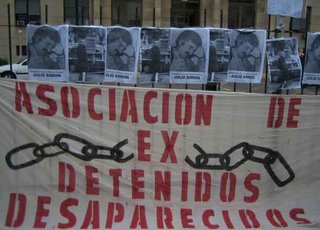 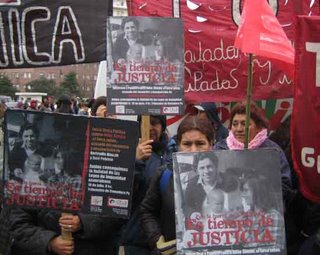 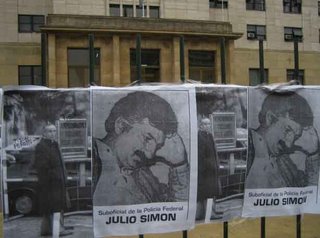 By Marie Trigona
Znet commentary
August 11, 2006
A federal court in Argentina sentenced former police chief Julio Simon to 25 years in jail for the forced disappearances and torture of dissidents during the 1976-1983 dictatorship. This is the first sentence against a former government agent for human rights violations since 2005 when the supreme court struck down amnesty laws protecting former officers who served during the era of military dictatorship. Julio Simon, alias the "Turco" was charged with the forced disappearances of José Poblete and Gertrudis Hlaczik in 1978. The court also charged him of stealing the couple’s eight month old baby.

Some 30,000 activists were kidnapped and murdered during the military junta dictatorship, which ruled Argentina from 1976-1983. During the Dirty War in Argentina, much of the population remained silent due to censorship imposed by the military government. After the dictatorship ended, ex-detainees and human rights groups gathered extensive information to prosecute officers who served during the military dictatorship. However, the full stop and due obedience laws implemented in the early 90's foreclosed any successful prosecution of ex military leaders for human rights crimes by the courts. For over 20 years, victims and their families have waited for due justice.

Last year the Supreme Court overturned the amnesty laws that protected former military officers who served during the dictatorship. Courts have opened several high-profile cases of officials to be tried for crimes during the 1976-83 dictatorship. However, thousands of cases have remained unopened. To date only 160 ex-military personnel have been tried and sentenced for human rights violations. The military ran some 375 clandestine detention and torture centers throughout the country. The 160 who have been tried does not account for ½ a person for each detention center. The terror inside the camps were committed by thousands of military who today benefit 20 years of impunity and freedom.

Over a dozen ex-detainees testified during the trial that Simon had tortured them in the Olimpo, one of the most infamous clandestine detention and torture centers in Buenos Aires. He also carried out dirty work in Club Atletico and El Banco. Many testified that Simon was in charge of welcoming detainees. Susana Caride, torture survivor testified that when she arrived Simon, "beat me with his fists, chains and then threw salt water on me."

The methods of torture used in the 375 clandestine detention centers were a systematic plan to terrorize victims and society. These methods were taught through manuals provided by the US government in places like the School of the Americas. Graciela Trotta testified that Simon made a group of nude men at El Olimpo form a pyramid, a method of torture used in US prisons in Iraq 30 years later.

Rebeca Sacolasky, who is now 83-years-old testified in the trial. She is an ex-detainee and torture survivor. "I was tortured by this sinister character. Now I’m satisfied because he won’t be released for 25 years. I would have liked for the judge to give him a higher sentence, because Simon has a violent heart. He tortured many of us until some of the comrades died." For Sacolasky, her revenge has been continuing to fight for human rights. "I’ve come into contact with Simon several times. It didn’t fill me with rage, it filled me with the strength to continue to fight. I was able to become a human rights activist."

During the trial, Simon refused to testify. The only explanation that Simon gave was during a televised interview in 2000, which was used in the courtroom. "The general criteria was to kill everyone," he said this when he thought the era of impunity was never ending.

JULIO SIMON’S IMPUNITY and ESCRACHE POPULAR
Nora Cortiñas, one of the founders of the Mothers of the Plaza de Mayo, said that the same leaders responsible for illegally detaining, torturing, and killing 30,000 activists during the military junta dictatorship from 1976-1983 benefited from state-sponsored impunity for over 30 years.. "Julio Simon formed part of the groups that tortured detainees. They thought that they would never be punished. They never hid their faces or identity because they wanted the prisoners to see them, thinking that justice would never be applied to them."

After the military dictatorship, Simon settled down in the Buenos Aires’s downtown area of Congreso. He had been on trial, but the Full Stop and Due Obedience laws cleared him of any possible charges. During the 90's he ran a prostitution ring in Congreso, sending women to attend clients from a corner café just a few blocks from national congress.

In the mid-90's an activist recognized Simon, while he was sitting in a café. For weeks, human rights organizers led their own investigation, following Simon’s activities. In 1996, the group H.I.J.O.S. (Children for Identity, Justice and Against Forget and Silence) formed using the escrache as a tool for popular justice and against impunity. Eduardo Nasban, member of H.I.J.O.S. whose parents were disappeared during the dictatorship said that one of the first escraches H.I.J.O.S. organized was against Simon. "The escrache emerged 10 years ago in the search for justice. We began by bringing together organizations and groups of neighbors to show that impunity isn’t an abstraction. It’s something concrete that has a name and address. One of the first escraches organized was against Turco Julian."

Just a few years ago, Simon re-appeared with impunity. During a protest near Congreso several activists recognized Simon sitting in a café. They were surprised, but ready to take action. Simon got a taste of popular justice. They entered the café and beat him up, giving him a few cracks on the head.

JUSTICE and TRUTH
Human rights activists and relatives of the disappeared cheered and embraced each other after the verdict was read on August fourth. Human rights groups have said that this trial was made possible thanks to activists, not government officials. "These cases have been opened after 30 years thanks to popular struggle. But in this trial, the court hasn’t charged Julio Simon with genocide or crimes against humanity, but as if they committed a regular crime," said Leopoldo Tiseira, member of H.I.J.O.S. and whose mother and father were disappeared.

After twenty years, the courts still haven’t located the majority of the mass graves or remains of the disappeared. Human rights groups H.I.J.O.S. and Grandmothers of the Plaza de Mayo have worked for over 10 years to find the whereabouts of the estimated 500 babies born while their mothers were in illegal captivity. Thanks to the work of H.I.J.O.S. they have recuperated the identity of 82 sons and daughters. Right groups have continued to demand that the government release documents from the military dictatorship to locate the children and remains of the disappeared. "The relatives and human rights organizations have always been the ones who led the investigations against the torturers and repressors. The state has opened the possibility to put them (alleged repressors and torturers) on trial, but the government doesn’t have the policy of opening investigations," said Tiseira.

On the opening day of the trial, the Mothers of Plaza de Mayo were banned from entering the courtroom wearing their white head scarves, symbolizing the diapers of their missing children. The mothers left the courtroom, saying that they will not negotiate their head scarves.

The Mothers of Plaza de Mayo and CELS-Center for Legal and Social Studies, later reported that the federal prosecutor handling the trial, Raul Perotti has been accused of participating in torture sessions at a clandestine detention center in the province of La Pampa, where he worked at the time. According to Adriana Calvo, who was kidnapped, forced to give birth in a detention center and had her baby taken from her, Perotti’s defense marks another roadblock to justice. "It’s terrible that 30 years after the coup we find that the prosecutor who represents the state was an accomplice of the dictatorship’s genocide. The courts are filled with accomplices and it shows us the difficulty that we are going to have bringing cases against those responsible for forced disappearances."

Calvo expressed hope for the future "We are going to continue to work until those responsible for the death of 30,000 go to jail. But what we want is for them to be tried for what they really are, actors in genocide, and not for particular charges. In Argentina the military disappeared 30,000 people, we can’t hold a trial for each of the disappeared. We want those responsible to be tried for the plan the military orchestrated to destroy the majority of the population."
Publicado por Marie Trigona en 2:35 PM No comments: