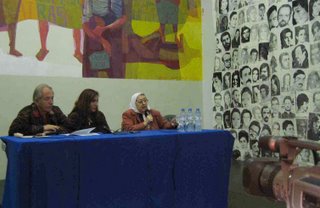 by Marie Trigona
Listen to this story http://www.fsrn.org/news/20060825_news.html
The Mothers of Plaza de Mayo report that a journalist from their radio station was detained while crossing into Palestinian territory. The journalist detained, Tamara Lalli says the Israeli Embassy in Buenos Aires handed over personal information to the MOSSAD, Israel’s Secret Intelligence Service.

Tamara Lalli works as a radio journalist for AM 530, the Mothers of Plaza de Mayo’s radio station. She was traveling in Israel, Palestine and Lebanon covering the Middle East conflict. While crossing into Gaza, agents from the MOSSAD detained her early Tuesday morning saying she was partial in her radio coverage. Lalli was later deported to Jordan and banned from entering Israel for life.

“They asked me all kinds of questions. They know all kind of information, what I do in Argentina, what I manifest, that I mobilize in support of the Palestinian people and that I speak out against Israel on the Radio. They didn’t tell me this from the beginning, they told me this at the very end. They had been informed through the Israeli embassy in Buenos Aires what we do in Argentina. The Israeli Embassy is spying on Argentine citizens. A foreign country spying Argentine citizens in our own country is a violation of civil rights. ”

Lalli is scheduled to return to Buenos Aires next week and hold a press conference. The Mothers of Plaza de Mayo say they are concerned over Israel’s censorship policies.

According to Lalli, the Israeli security forces used methods of psychological torture during her detention. “After that they made me go to another office and strip naked. An official came in stands next to me, while I’m naked with a machine gun in his hand. After being there for six hours the official says to me: ‘look we are not the intelligence service from Paraguay, Uruguay or South America, we are the Israeli intelligence service. We know everything you do from our informants at the embassy. I asked what that means. You work at a radio and speak against Israel, he says. But I said, I want to go to my land, you are violating my right to free speech. He said to me: ‘Here there’s no free speech, there’s security.’”

The Israeli embassy has issued public statements criticizing the Mothers of Plaza de Mayo for their support of Palestinian sovereignty.

Carlos Aznarez, who directs Resumen Latinoamericano, a radio show Lalli reports for, says that Israeli constituents have tried to censor Argentina’s media coverage of the war in Lebanon and Palestine. “Tamara was detained precisely because she is a journalist who follows through with her mission and doesn’t sell her self to Zionism in this conflict. She has always tried to give us information that is the truth about the atrocities of Zionism.”

“Her detention means that the Israeli embassy has more weight than Argentina’s foreign ministry. It means that Argentina’s sovereignty is violated by trying to stop an Argentine citizen from entering Palestinian territory. It means that there is a need to commit hostile acts against anyone who wants to inform what is really happening, about the acts of blood being carried out by Zionism right now in Lebanon.”

The Latin American Journalist Federation and Argentina’s journalists union have issued statements against Lalli’s detention and deportation. Lalli and the Mothers of Plaza de Mayo are taking the case to the courts with charges that the Israeli Embassy violated Argentine citizens’ right to privacy and sovereignty.
Publicado por Marie Trigona en 11:05 AM No comments: