IRC Americas Program
Argentines are searching for a missing 77-year-old witness whose gripping testimony of torture helped convict a former police officer of crimes committed during Argentina's military dictatorship. The trial was one of the first to take place since an amnesty law was overturned in 2005. No one has seen or 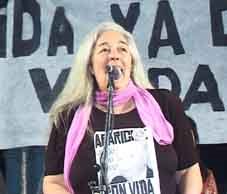 heard from Julio Jorge Lopez since September 18 when he was last seen in his home in La Plata, 40 kilometers from Buenos Aires.

Lopez, a retired construction worker and former political prisoner disappeared just hours before he was slated to give his final testimony on the eve of the conviction of the former police investigator, Miguel Etchecolatz. Human rights groups are pointing to provincial police with ties to the 1976-1983 military dictatorship for kidnapping the witness.

Argentina's president and Buenos Aires governor have both expressed concerns over Lopez's disappearance and the recent wave of threats against torture survivors who are testifying in trials against former members of the dictatorship. Provincial police aided by police dogs are hunting for Lopez. A government-sponsored television ad has aired nightly, offering US$64,000 in award money for leads on Lopez's whereabouts. After 22 days of searching, police have hit a dead end in their search for the witness.

Nilda Eloy, a torture survivor who testified with Julio Lopez to convict Etchecolatz, stood in front of thousands during a recent rally to demand to know Lopez's whereabouts. Etchecolatz, a former police chief, was sentenced to life imprisonment for crimes against humanity committed during the 1976-1983 dictatorship.

While choking back tears, Eloy said that the government is responsible for Lopez's disappearance because police officers that served under the dictatorship still form part of security forces. "Most of the evidence suggests that Julio Lopez was kidnapped by the gangsters from the Greater Buenos Aires police force and rightwing fascists, because Julio was one of the key witnesses that led to Miguel Etchecolatz's sentence to life imprisonment in a regular jail."

Etchecolatz's sentence for crimes against humanity, genocide, and the murder and torture of political dissidents during the dictatorship represents the first time in the nation's history that the courts have sentenced a military officer to life for crimes against humanity. Etchecolatz, now 77, ran clandestine detention centers in the province of Buenos Aires during the military dictatorship.

In his testimony, Lopez said that Etchecolatz tortured him during his detention from 1976-1979. He said that the police chief would personally kick detainees until unconscious and oversee torture sessions. Etchecolatz has appealed the court's decision.

This is the second conviction of a former military officer charged with human rights abuses since 2005 when Argentina's Supreme Court struck down immunity laws for former officers of the military dictatorship as unconstitutional. Etchecolatz was arrested and sentenced to 23 years in 1986, but was later freed when the "full stop" and "due obedience" laws implemented in the early '90s made successful prosecution of ex-military leaders for human rights abuses virtually impossible.

"The repressive apparatus tried to stop us, and those of us who challenge the impunity granted the military for over 30 years have received anonymous phone calls and threats," said Eloy. Over 130 witnesses testified during the trial, including former president Raul Alfonsin, who defended his decision to pardon military officers arrested for human rights abuses. Before Etchecolatz's sentencing, two witnesses in the trial were threatened. During the trial, federal police there to guard witnesses had to be removed because they were pressuring witnesses inside the courtroom.

Eloy added, "Even after the sentence, the threats continue because thanks to our never-ending struggle, for the first time a court ruled that the dictatorship had committed crimes against humanity along the lines of planned genocide." At least 11 judges, the Buenos Aires Human Rights secretariat, and the president of the human rights group "Grandmothers of the Plaza de Mayo" have received threats. Many torture survivors testifying in the ongoing trials against former figures of the military dictatorship have entered witness protection programs. Many others have refused police guards.

At a press conference, Adriana Calvo, who was kidnapped and forced to give birth in a detention center run by Etchecolatz, said that the disappearance of Julio Lopez is an attempt to scare survivors and discourage future trials against torturers. "We associate Julio Lopez's disappearance with the conviction of Etchecolatz for crimes against humanity. We think that 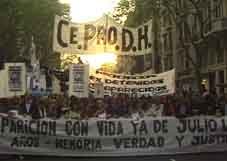 Calvo added that Lopez's disappearance on the eve of the September 19 conviction could have stopped or delayed the charges against Etchecolatz. The day of Lopez's disappearance, the legal prosecutors had to present the allegations against Etchecolatz. As a key witness, Lopez needed to be present for the allegations. Calvo discounted any possibility that Lopez had suffered a personal crisis caused by reliving his time in the detention center during his testimony. "Although he recently turned 77, Lopez knew perfectly well the implications that his presence in court had. He was proud of the fact that he had re-activated his activist and human rights defense activities."

Marie Trigona is a journalist based in Buenos Aires and a regular contributor to the IRC Americas Program (www.americaspolicy.org). She can be reached at mtrigona@msn.com.