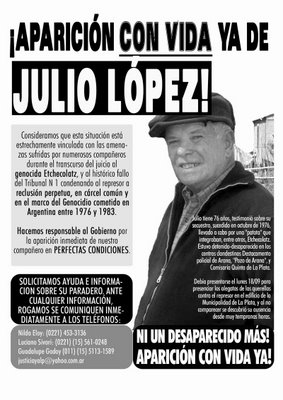 
Argentina has opened several high profile criminal cases charging former military officers for human rights abuses during the 1976-1983 military dictatorship. For the first time in the nation’s history, an Argentine court sentenced a military officer to life for crimes against humanity earlier this month. As the South American country re-evaluates its dark history, new skeletons in the closet have reappeared.

Police are currently searching for a missing 77-year-old witness whose gripping testimony of torture helped convict a former police officer in the first “Dirty War” trial since an amnesty law was overturned. Julio Lopez, a key witness in the trial of a landmark human rights case, went missing on the eve of the September 19 conviction of a former police investigator. Human rights groups are pointing to the provincial police with ties to the 1976-1983 military dictatorship for kidnapping Lopez.

A federal court in Argentina sentenced a former police chief to life in prison for crimes against humanity and for the murder and torture of political dissidents during the 1976-1983 dictatorship. Retired police chief Miguel Etchecolatz, now 77, ran clandestine detention centers in the Buenos Aires province during the military dictatorship. He is the first military officer to be sentenced for crimes against humanity and sentenced to life.

In the courtroom Etchecolatz kissed a crucifix after the sentence was read. Several spectators threw red paint on him and chanted assassin as he was escorted out of the courtroom. Human rights activists and relatives of the disappeared celebrated the verdict while embracing each other inside and outside the court room in La Plata, 40 kilometers from Buenos Aires.

This is the second sentence of a former military officer charged with human rights abuses, after Argentina’s Supreme Court struck down as unconstitutional legal immunity for former officers who served during the era of military dictatorship. He was arrested and sentenced to 23 years in 1986, but was later freed under the full stop and due obedience laws implemented in the early 90’s foreclosed any successful prosecution of ex-military leaders for human right crimes by the courts.

In his testimony, Lopez said that Etchecolatz tortured him during his detention from 1976-1979. He said that Etchecolatz would personally kick detainees until unconscious and oversee torture sessions. Over 100 witnesses testified during the trial, including former president Raul Alfonsin, who defended his decision to pardon military under arrest for human rights abuses. During the 90’s Etchecolatz benefited from state-supported impunity. For the past ten years, Etchecolatz lived in the Buenos Aires province and allegedly has ties to neo-nazi groups in the provincial police force.

At a press conference, Adriana Calvo who was kidnapped and forced to give birth in a detention center ran by Etchecolatz, said that the disappearance of Julio Lopez is an attempt to scare survivors from carrying out future trials against torturers. “We associate Julio Lopez’s disappearance with the conviction of Etchecolatz for crimes against humanity. We think that Etchecolatz’s bullies still in action kidnapped Lopez for revenge.”

Calvo added that Lopez’s disappearance on the eve of the September 19 conviction could have stopped or delayed the charges against Etchecolatz. The day of Lopez’s disappearance, the legal prosecutors had to present the allegations against Etchecolatz. As a major witness, Lopez needed to be present for the allegations. She also counted any possibility that Lopez had a personal crisis from re-living his testimony of surviving a detention center. “Although, he recently turned 77, Lopez new perfectly well the implications that his presence in court. He was proud of the fact that he had re-activated his activist activities.”

Many of the witnesses have received anonymous threats, including those who testified in the Etchecolatz trial. During the trial, federal police who were there theoretically placed to guard witnesses had to be removed because they were pressuring witnesses inside the courtroom.

The Buenos Aires police, infamous for their brutality, have faced recent purges since 1998. However, many of the off-duty police still operate informally and have ties to right-wing groups. In Buenos Aires alone, human rights group COREPPI has registered 1,900 cases of gatillo facíl, young kids gunned down by easy trigger police.

Even the government is worried over the whereabouts of Lopez. Provincial police aided by police dogs are hunting for Lopez. A government sponsored television ad has aired nightly, offering 64,000 dollars in award money for leads on Lopez’s whereabouts. Calvo from the Ex-detainees Association said that money won’t solve the problem and that it is unlikely for police to find Lopez. Buenos Aires governor Felipe Sola admitted that provincial police may be connected to Lopez’s disappearance. Each day that goes by, the likelihood of finding his whereabouts becomes more grim.

During a meeting between human rights groups and Buenos Aires government officials, activists questioned the Buenos Aires Security Minister León Carlos Arslanián whether police officers who served during the dictatorship were still active. He answered, “yes about 70 officers but they were only 20-years-old during the military dictatorship.”

Calvo who was present at the meeting said: “You have no idea how the young officers with only 20-years-of-age tortured us.” Solá retired 60 provincial police who operated in clandestine detention centers on Monday September 26. It’s alarming that officers who operated in the clandestine detention centers and had direct contact with torture victims were working as active officers until this past week.

Fukman says that police today have a clear interest in defending amnesty laws that protect military and police who disappeared and tortured 30,000 people. “The government uses security forces to repress, that’s where the state’s responsibility in the disappearance of Lopez begins. Because the government is saying that it needs the police to repress and its clear that these groups are going to repress to defend their impunity.”

Human rights groups are organizing a series of rallies to demand that Lopez re-appears alive and safe. Lopez’s disappearance and the threats against ex-detainees is a grim reminder of the traces of the military dictatorship. Human rights activists have said that they can’t trust the police forces of today, who continue with the same model left behind by the military junta. “We are convinced that the police aren’t going to find Lopez,” said Calvo. “The only ones who can help to find Lopez are his fellow comrades and the people.”

Marie Trigona is an independent journalist. She can be reached at mtrigona@msn.com. This commentary was originally published on Znet.