Wichí fight for land in Chaco 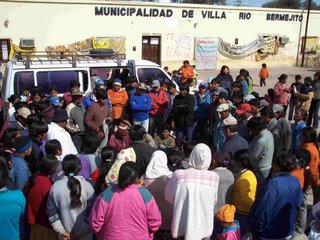 by Marie Trigona
Listen to this story on FSRN
http://www.fsrn.org/news/20060816_news.html

Nine representatives from the Wichí indigenous community complete their 27day on hunger strike in Argentina's north eastern province of Chaco . Fornearly two months hundreds of indigenous people from rural areas have camped out in front of the provincial government building to demand land distribution, education and health care for Chaco 's indigenous communities.

"Our children suffer here at the camp, we are suffering. The rich peoplewith gold say that we're poor off here at the camp, it's true but we'regoing to continue to fight" Eleuterio Gomez, one of the weathered protestors at the camp, says that his community is prepared for hardship after 500 years of colonialism.

Dozens of improvised tents, clotheslines and pots over campfires scatter the central plaza in Chaco 's capital Resistencia. A group of women prepare fried bread and stew for hundreds of protestors at the 60 day old camp. Food runs shortat every meal and many suffice with hot maté. Chaco , the nation's poorest province is home to 60,000 indigenous from theToba, Mocoví and Wichí communities. The nine on hunger strike and hundreds at the camp demand that Governor Roy Nikisch meet with Wichí delegates toresolve the complaints of improper public land distribution. In the pastdecade, soy farmers and cattle ranchers have bought much of government land that should have gone to indigenous communities and small farmers.

According to Mártires López, from Union Campesina an indigenous organization, Governor Nikisch hasn't respected a law protecting indigenous land. Aborigines have sold their land, which is something terrible. Thousands of hectares have been sold. We're in a bad situation, we don't know how to demand our rights. We have a law, but it's like the law doesn't exist for us. The law says that the government has to delegate land to communities. But they aren't following through. The children are dying of hunger. There's not a minimal level of health for us in Chaco ."

The Wichí suffer from malnutrition and preventable diseases like Chagas andCholera. The protestors are also calling for the resignation of Lorenzo Heffner, a local mayor who they accuse of discriminating against indigenouspeople.

Monica Chalole says that the governor has refused to meet with Wichí delegates for months, leading the hunger strikers to take action. "These communities got tired and said that they were going to do something to change the situation. According to studies 3.9 of government land has been sold to businessmen and politicians. As indigenous people we believe that the national and provincial governments have never seriously considered resolving the issue of the aboriginal people. This is why the indigenous communities are living in horrendous conditions."

The hunger strikers have been locked in a government office with no windows.Despite declining health, the hunger strikers continue with their protest.Wichí have set up a camp in front of Chaco 's central offices in Buenos Aires this week.
Publicado por Marie Trigona en 11:36 PM 1 comment: